This Day in Herpetology – January 1 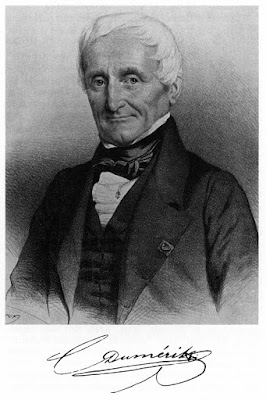 Andre-Marié-Constant Duméril, physician and anatomist, was the greatest taxonomic herpetologist of his era. He was born in Amiens (Somme), France, on 1 January 1774, and showed an early interest in nature, especially insects and salamanders. He began his medical training in 1793, at the École Secondaire de Médecine in Rouen, specializing. in anatomy, but in 1795 transferred to the École de Santé in Paris. By 1799, he had been promoted to chief of anatomical work there, and in 1801 he became Professor of Anatomy and Physiology. During this same period he continued his zoological work and became associated with the Muséum National d'Histoire Naturelle, in particular with the comparative anatomist Georges Cuvier, only five years Duméril's senior.

In 1803, Count de Lacepède, who held the professorship (or head) of ichthyology and herpetology at the museum, resigned due to his preoccupation with political work. Cuvier nominated Duméril for the post, and he reluctantly accepted but only on condition that he be regarded as temporary; eventually, on Lacepède's death in 1825, Duméril became official head, a position he relinquished, in turn, to his son, Auguste Duméril, in 1857. Thus, Constant Duméril's service to the museum spanned 54 years, during which time French domination of world herpetology reached its zenith, due largely to him.

In view of Duméril's enormous productivity at the museum it is easy to forget that he continued his medical  duties throughout, only coming to the museum to teach. In fact, he was a very popular lecturer and once remarked that this was the most personally satisfying aspect of his work. Cuvier and Achille Valenciennes were responsible for the rapidly growing collections, but when Cuvier died in 1832, Valenciennes assumed the professorship of malacology, leaving Duméril without assistance. Fortunately for Duméril and for herpetology, there was already someone on the museum's staff, Gabriel Bibron, who perfectly complemented Duméril's talents. Duméril's interest was clearly at the level of higher taxa and classification, as demonstrated in his first major work, "Zoologie Analytique" (1806), which covers all animals and shows the relationships of the genera; indeed, species are not mentioned at all.

France at this time, under Napoleon, was enormously  powerful, both militarily and economically, and the museum's collections were to grow as a direct result. France's victorious generals of the empire brought back large collections, even to the extent of emptying the shelves of museums in the conquered countries under the guise of "loans" or even as "gifts" of the grateful people to the French. This was also a time of great voyages and expeditions, for commercial as well as military purposes, when the European powers began to develop overseas possessions, and France was preeminent. All of the booty was returned to Paris and there came under the control of one man: Constant Duméril. Together with his primary assistant, Gabriel Bibron, Duméril proceeded to produce a project of enormous scope, a detailed review of the world's herpetofauna, based on the then-largest herpetological collection.

Duméril himself was responsible for the grand design and  arrangement of genera—the first natural arrangement of genera ever undertaken for amphibians and reptiles—and thus one of the classical monuments of descriptive zoology. He was assisted in the generic arrangement by a young German, Michael Oppel, who was his student in 1807–1808. Bibron's responsibility was the description of species. The result was the "Erpétologie Générale ou Histoire Naturelle Complete des Reptiles" (1834–1854), in nine volumes (bound in ten, since volume seven is in two parts) plus an atlas of 120 plates that was issued in plain and handcolored versions. After Bibron's premature death in 1848, Auguste Duméril joined his father in writing the two remaining volumes (seven and nine).

The "Erpétologie Générale" was the first work that gave  a comprehensive scientific account of all amphibians and reptiles, including their anatomy, physiology, systematics, and associated literature. In this enormous work some 1393 species are covered. Each is provided with a full synonymy and a detailed description; many are illustrated. By comparison, George A. Boulenger's later (1882–1896) review of the world's herpetofauna, also in nine volumes, covered 8469 species, but his descriptions are far less detailed.

For all the advances inherent in the "Erpétologie Générale," a major defect was the recognition of amphibians as an order of reptiles, a reversion to the arrangement of Alexandre Brongniart (1799). This was adopted in spite of P.-A. Latreille's (1825) separation of amphibians as a class and the accumulating embryological evidence of Karl E. von Baer (1828) and Johannes Müller (1831), a particularly surprising arrangement in view of the breadth of Duméril's knowledge. Besides his interests in higher taxa and anatomy, Duméril was from his boyhood an observer of living animals and, accordingly, was responsible for the creation on the museum grounds of the menagerie of live specimens (in 1838), which permitted many important observations to be made of relevance to systematics.

The death of Gabriel Bibron created a ten-year publication  gap during which two separate works were issued that must be regarded as extensions of the "Erpétologie Générale": the "Catalogue Méthodique de la Collection des Reptiles" (1851), a supplement to the volumes already published (one through six; eight), which, although formally authored by both Dumérils, is generally attributed to Auguste Duméril, and the "Prodrome de la Classification des Reptiles Ophidiens" (1853), by Constant Duméril alone, giving a preview of his classification of the snakes in volume seven (published in two parts, 1854). Despite their preoccupation with this grand project, the three authors continued throughout the same period to produce other works on amphibians and reptiles, often incidental to the larger project but sometimes even quite separate from it and of a sizeable and valuable nature.

By the time the "Erpétologie Générale" was finished,  Constant Duméril was 80. He had relinquished day-to-day supervision of the laboratory to his son the previous year (1853) and finally retired in 1857. During these last years, still healthy, his interests turned to his first passion, insects. He received many honors, including promotion to Commander of the Legion of Honor just two months before his death, in Paris, on 14 August 1860 .

Adler, Kraig (eds.) 1989. Contributions to the History of Herpetology. Society for the Study of Amphibians and Reptiles, Oxford, Ohio, 202 p.

This book is still available from SSAR (click here) 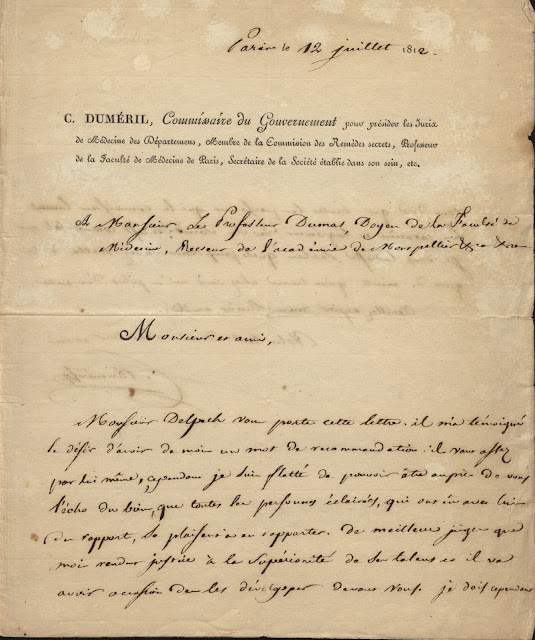 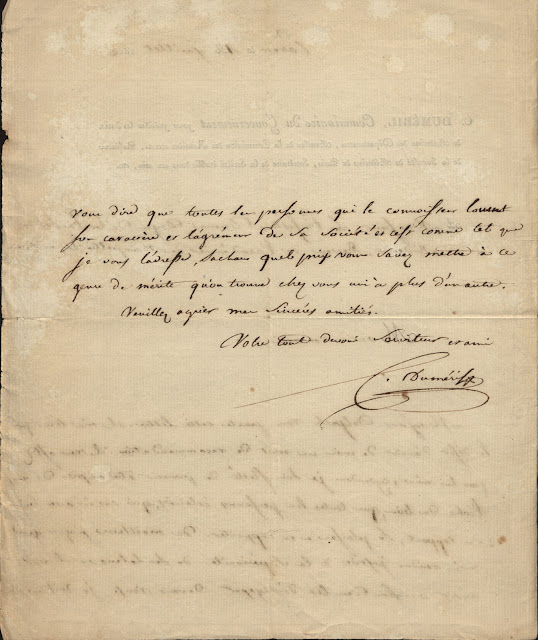 Email ThisBlogThis!Share to TwitterShare to FacebookShare to Pinterest
Labels: This Day in Herpetology