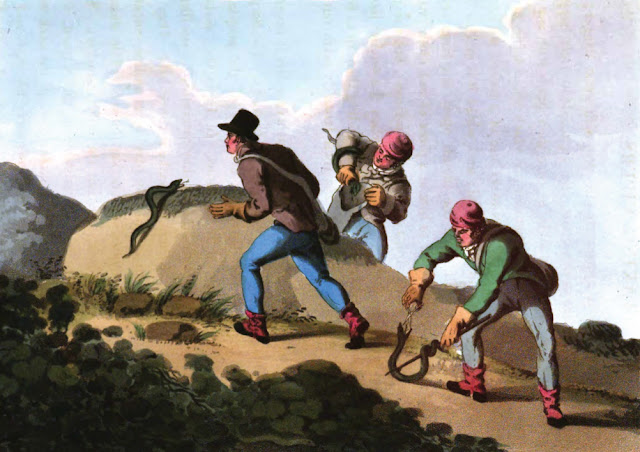 Taking the Viper is apparently attended with great danger; yet the persons employed are so dexterous, that an accident rarely happens. Vipers crawl slowly, and are unable to turn their heads with any con­siderable agility, from the firm manner in which their spine is arti­culated. Some of the Viper-catchers make use of a forked stick, with which they fix the animal to the ground; and, while it is making inef­fectual efforts to defend itself, with the mouth open, the fangs are cut away: others provoke the Viper to bite at a piece of red cloth, which, being snatched hastily away, drags out the poison-fangs: but the most certain method of rendering them harmless, is, when the catcher has the boldness to seize them suddenly by the neck, holding them in so firm a grasp, that they are unable to turn. He then leisurely takes out the poison-fangs, and deposits the Viper in a bag.

In all hot countries the multiplicity of Serpents renders it necessary that the destroying of them should be a sort of business.  The Serpent catchers do not fail to impose upon the credulity of the people, by attributing their art to magical incantations. In India they certainly display considerable skill in their art; for they ascertain, by smelling indifferent burrows, in which of them the Snake is concealed! They pretend to charm the reptile from its hole, by playing on an instrument not unlike a hautboy; but it is a question whether the seeds of the dunneai, which they scatter on the floor, are not the only attraction. These smell like coriander, and seem to be irresistible to the Serpent, which speedily comes out, and is seized by the catcher towards the neck with a firm grasp, while his assistant-musician throws away his pipe, and robs the Serpent of its fangs. Thus not merely Vipers, but even the formidable Cobra Capella is rendered an innocent animal by the dexterity of its captor.