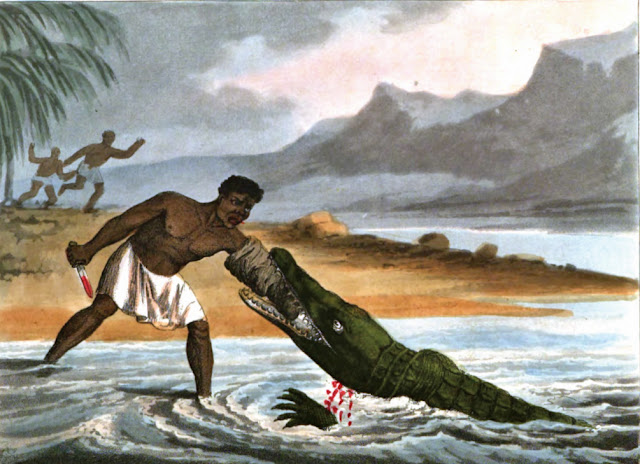 Crocodiles are naturally defended by armour almost impenetrable; being covered with strong hard scales, except the top of the head, where the skin is fixed over the bone of the scull, and in the throat.

Notwithstanding the formidable appearance of the Crocodile, the African negroes, in the neighbourhood of the river Senegal, venture to surprise it in places where the water is not sufficiently deep to allow it to swim. They approach it boldly, having no other weapon than a knife in the right hand, and the left arm ·wrapped round with a cow's hide. As they advance they present the left arm, which the Crocodile swallows greedily; but, while it is in the throat, the negroes have time to give it several stabs below the under jaw, where it is most vulnerable; and the water getting in at the mouth, which is held involuntarily open, -as it is occasionally forced beneath the surface of the river, it is soon destroyed. The Crocodile is also at-tacked by a party of negroes; one of whom fixes the mouth of the animal open with their dart called zagaye, while the rest hold it under water till it is dispatched. The flesh of the Crocodile is white and juicy, and is considered by those people as very delicious but Europeans who have tasted it, have been disgusted by the strong musky flavour with which it is impregnated.

M. Goldberry says, that the flesh of the different species of Crocodile is constantly sold in the market of Isle St. Lewis, in Senegal, where it is purchased by the negroes as a general article of food. The author was several times prevailed upon to taste this repast : and􀅏 on one occasion, he even had a piece dressed in the French manner, with rich gravy and spices: but he says that no cooking will make the flesh tender-that it is never free from a strong musky smell-and, in short, that he considered the dish to be detestable.