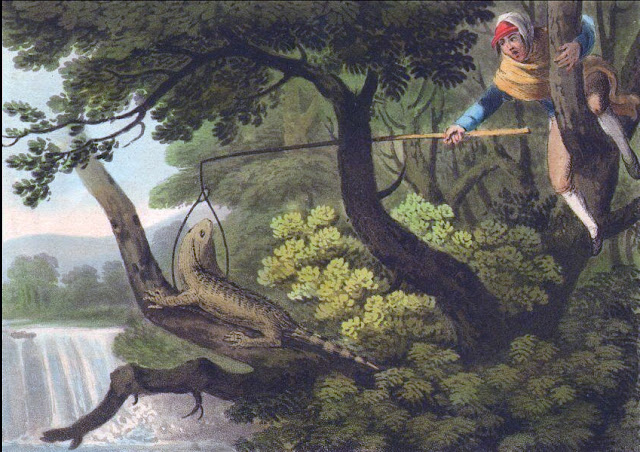 The Guana is a species of the Lacerta, or Lizard tribe; under which genus is included all the varieties of crocodiles and alligators. The great American Guana is generally of a green colour; its back exhibits the appearance of a saw, and it is distinguished by a pouch under the throat, which it is able to expand or contract at pleasure, and which gives it an appearance truly formidable. It is, however, perfectly inoffensive. It inhabits rocks and woods, and subsists on vegetable food, as well as on certain species of insects. It deposits its eggs in the earth, where they are hatched by the heat of the sun; they are remarkable for having no testaceous covering, and are much valued for food.

The Guana is very common in Surinam, in the woods of Guiana, in Cayenne, and in Mexico. In the West India islands, the flesh is much esteemed, and is even preferred to poultry. It is made an article Of trade in the Bahamas, and is carried alive to Carolina and other parts of America, where the flesh is salted, and kept for use. The Guana is easily distinguished from all the tribe of lizards, by the large pouch abovementioned, as well as by the serrated crest, which reaches from the head to the extremity of its tail. It is sometimes five or six feet in length, is covered with small scales of various colours, and appears as if highly varnished. It is taken by the following artifice a man, with a long stick, having a cord at its extremity, formed in a running noose, ascends a tree, where a Guana has extended itself on a branch, to bask in the beams of the sun. The man advances cautiously, whistling in a par­ticular manner; the animal seems to be pleased with the sound, and raises its head, as if listening; the man gradually approaches, still whistling, and begins by tickling the sides and throat of the Guana with his stick, to induce it to assume such a position, that he may slip the noose over its head; which is no sooner done than he gives it a sudden jerk, and causes it to fall to the ground, when he dispatches it. The Guana, in America, is also taken by dogs, which are trained to the chase. In the Bahama islands, the dogs are so well disciplined, that they will take them alive.