BATTLE BETWEEN THE GREAT BOA AND A TIGER, an Edward Orme Plate 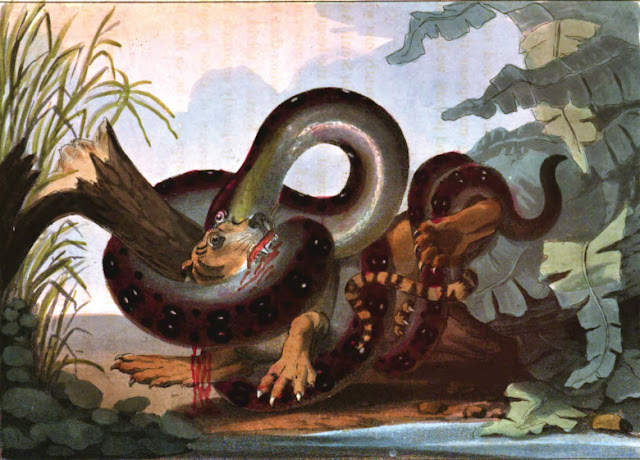 The Boa constrictor is one of the most formidable and remarkable of inferior animals; and however surprising may appear the tales which are handed down to us respecting its size and powers, we have sufficient evidences of their veracity.

The species of serpent here spoken of is more frequently met with in Africa than elsewhere; though it is also to be found in South America and in India. On the bank of the Senegal it attains the length of from thirty to forty feet, and is from three to four feet in circumference. Although these reptiles have become everywhere less common than for­merly, yet they are numerous in the swamps and forests of torrid cli­mates. In the vicinity of Sierra Leone they frequently approach the huts of the negroes. According to the accounts of these people, the Boa is not dangerous to men, of whom it appears to be in fear, but it is dreadful to children and quadrupeds.

There is no doubt of the fact that it will destroy, and swallow at one meal, an entire ox, or even a buffalo; but the manner in which it performs this astonishing operation has not been accurately described by naturalists, who have given way to the general propensity for the marvellous. The inhabitants of the Senegal gave the following account of this serpent to M. Gotberry, a very intelligent French' traveller, who resided a long time on the French establishment in Western Africa.

The Boa secretes· itself, when watching. for prey, dither in some thick forest, or near a pool of water: here it remains extremely tranquil, wound in three spiral rows. When an animal comes to drink, the serpent suffers him to approach, and w bile he is in the act of drinking, darts upon him, coils itself round his body, and by violent pressure or constriction finally suffocates him. From this circumstance it has acquired the specific name of constrictor.

When it is certain that its prey· is suffocated and lifeless, it uncoils itself and attacks the animal with its curved teeth, which it buries deeply in all parts of its body. Afterwards it again winds round its prey in many folds, and by rapid evolutions and sudden constrictions, breaks all the bones of the animal, not excepting the very largest, even those of the head. These efforts are so strongly and so often repeated, that the bones of the dead animal are at length reduced to small pieces.

After this preparation the Boa bedaubs the whole of its prey with a gelatinous sort of saliva, which it disgorges in abundance, and which facilitates the process of swallowing the animal that has been killed It then spreads out the mass of its victim, by creeping along it; and as no difficulty is opposed to this process, on account of the bones being all broken, the operation is very easily performed.

Every arrangement· being now made for devouring the animal, the serpent places himself opposite to it, face to face; and extending him­self out at full length, he snaps at the head of his prey, and gradually chews and swallows the whole carcass, without wasting a single morsel.

Sometimes the Boa attacks an enemy which possesses the means of making a dreadful resistance. The teeth and claws of a tiger, who is attacked when raging with thirst, are furiously employed upon the serpent; yet the latter is asserted to be always victorious, in consequence of surrounding the animal, with its numerous coils, and exhausting it by excessive pressure.

It appears that the reason why this enormous serpent is not dreaded by the negroes is, because nature has wisely withheld from it venom; which would have made it a most horrible scourge of the human race.

[Method of Killing the Boa Serpent.]

The natives destroy this serpent by surprising it in a state of torpor, after a gluttonous meal; and by a sort of instinct bordering upon reason, the constrictor takes · many precautions to avoid · his natural enemy; man. Before he swallows down a large animal he makes a tour round the spot, and carefully examines the surrounding country, to a considerable distance, to discover if there are either Negroes or 'Termite Ants near him, of which last he is in the greatest fear; for when he has devoured a whole carcass, his body is so swollen that he is incapable of the least motion, remaining in a sort of lethargy till his enormous meal is digested. It is in this state of absolute impotency that the people discover and kill him, and regale themselves at once with the animal that has been swallowed and the flesh of the devourer, which they con­sider a delicious morsel.

It is also in this state of lethargy that the termites invade and take possession of the reptile. They enter his body in millions, by the nostrils, ears, and mouth; and fixing themselves in his carcass, they will, in twenty-four hours, 'completely devour both the prey and the serpent, leaving of the latter nothing but the empty skin!

It was the Boa serpent which Livy mentions having met the soldiers of Attilius Regulus, near the river Bagrada, in Africa, and struck a panic into the whole army; till at length they destroyed it by employing against it the whole force of their military engines, and assailing it also with showers of stones!

Based on the geography this appears to be an observation of a North African Python and an African Lion. JCM