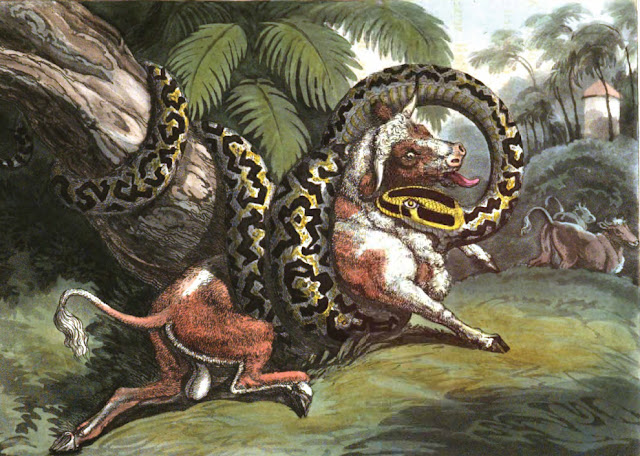 The subject of this Plate is taken from the anecdote of the Anaconda, in Lewis's " Romantic 'Tales, in which it is thus described:

"But how great was my joy at perceiving the Bull separate himself from the rest of the herd and begin to ascend the hill. We arrived near the groups of palm-trees; everything was hushed and tranquil not a sound was to be heard, except the noise of the scat­tered· branches as the Bull trampled them beneath his feet:- the Anaconda seemed to have disappeared altogether.

"On a sudden a loud and rattling rush was heard among the palms; and, with a single spring the Snake darted down and twisted herself round the body of the· devoted victim. Before the animal was- yet aware of his. danger, he already felt his dewlap inclosed between the wide-expanded jaws of the monster, and her teeth stuck into it deeply. Roaring aloud, he endeavoured to fly, and succeeded in dragging his tormentor a few yards away with him; but instantly she coiled herself round him in three or four folds, and drew the knots so close together, that the entangled beast was incapable of moving; and remained, as if rooted to the place, already struggling with the terrors and pangs of death. The first noise of this extraordinary contest had been sufficient to put to flight the remaining cattle."