A new book series published by the International Society for the History and Bibliography of Herpetology (ISHBH) named in honor of Richard Wahlgren (1946–2019), a founding member and first Chairman of the society. 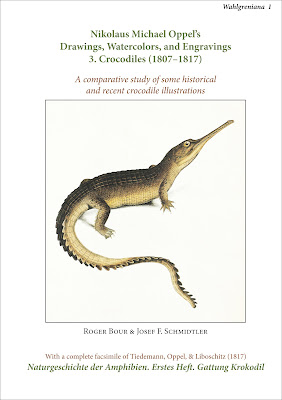 The inaugural volume is now available. Written by Roger Bour and Josef Schmidtler, this volume examines the crocodilian illustrations of Nikolaus Michael Oppel, drawn between 1807 and 1817; primarily eleven previously unpublished watercolors. These illustrations played an important role in early crocodilian taxonomy. The authors give a history of each illustration, referencing museum specimens they are based upon and comparing them to other contemporary and modern crocodilian illustrations.
In 1817 Oppel, along with Tiedemann and Liboschitz, published, Naturgeschichte der Amphibien. Erstes Heft. Gattung Krokodil. Originally planned as the first volume of a much larger work, this volume, along with an Atlas of plates, published separately by the authors, remains the only volume published. Limited to 150 printed copies, this book has fallen into obscurity and is largely overlooked, despite its importance. Although the text and the atlas are both available online, they are missing from the main online databases and libraries of older natural history books. Neither has ever been reprinted.
This volume reprints both the text and the atlas of Tiedemann, Liboschitz, and Oppel (1817), following the authors’ thesis on Oppel’s illustrations, which make up the bulk of the Atlas.

Volume 2 of Wahlgreniana is due out later this year: Bibliography of the Anurans of the United States and Canada. Version 3. Part 1: 1698–2012. Part 2:  2013-2021. by C. Kenneth Dodd is a bibliography of the natural history of  frogs and toads compiled during an extensive literature search for the author’s comprehensive two volume work, Frogs of the United States and Canada, 2nd edition, due out later this year.