Alfred Brehm was the son of Christian Ludwig Brehm and his second wife Bertha. Christian Ludwig Brehm, was a minister and ornithologist who published papers on birds and had an extensive collection of more than 9000 birds. Alfred’s interest in zoology, grew, but his first choice of a career was as an architect. He studied architecture from 1844 to 1846,  but stopped after two semesters when ornithologist Johann Wilhelm von Müller, was looking for help for an expedition to Africa. Brehm joined the expedition on 31 May 1847 as a secretary and assistant to von Müller. The expedition took him to Egypt, the Sudan, and the Sinai Peninsula; his discoveries were significant and Alfred was made a member of the German Academy of Natural Scientists Leopoldina, at age 20.

In May 1861 Alfred Brehm married his cousin Mathilde Reiz, with whom he had five children. He wanted to travel, in 1862 he accepted the invitation of Duke Ernst II of Saxe-Coburg-Gotha to accompany him on a trip to Abyssinia. Afterwards, Brehm travelled to Africa as well as to Scandinavia and Siberia. His essays and expedition reports on the animal world were well received. As a result, he was commissioned by the editor of the Bibliographisches Institut, Herrmann Julius Meyer, to write a large multivolume work on the animal world. This book became known worldwide as Brehms Tierleben. In English the title was, Brehm's Life of Animals.

Brehms Tierleben was one of the first modern popular zoological treatises. First published in German as a six-volume work that was completed in 1869 it was published by the Bibliographisches Institut of Herrmann Julius Meyer with illustration directed by Robert Kretschmer. The second edition completed in 1879 had ten volumes. It was translated into several European languages.

The volumes were illustrated by Gustav Mützel, August Specht, Friedrich Specht, and Robert Kretschmer as well as other artists.

Brehm's life was busy, filled with writing, scientific expeditions, and lecture tours. Yet, in 1862, he accepted the post of first director of the Zoological Garden of Hamburg and kept this position until 1867. Afterwards he went to Berlin, where he opened an aquarium. He remained with the aquarium until 1874. In the winter of 1883 to 1884 Brehm planned a lecture tour to the US. Shortly before his departure, his four children contracted diphtheria. Since he could not afford to break his contract, Brehm, a widower since 1878, went ahead with his tour. At the end of  January he received word of his youngest son's death. After the hardship of this news Brehm relapsed into malaria, which he had caught in Africa in his expedition days. On 11 May 1884, he came back to Berlin. In order to find peace, he returned in July to his hometown of Renthendorf, where he died on 11 November 1884. The Brehm Memorial Museum is located there.

This has been adapted from the Wikipedia pages for Alfred Brehm, Brehms Tierleben,

Below two plates with the title Flugdrache, illustrating the gliding agamid lizards of the genus Draco. 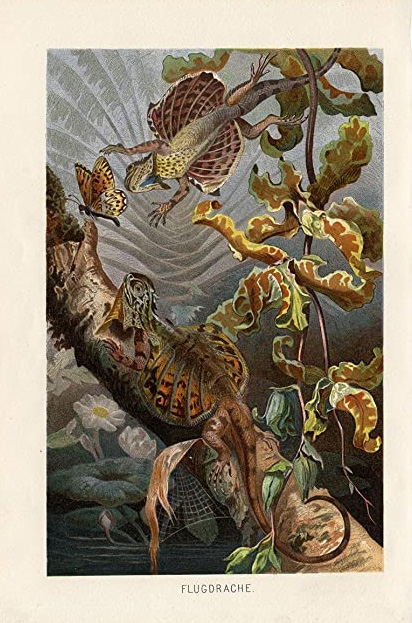 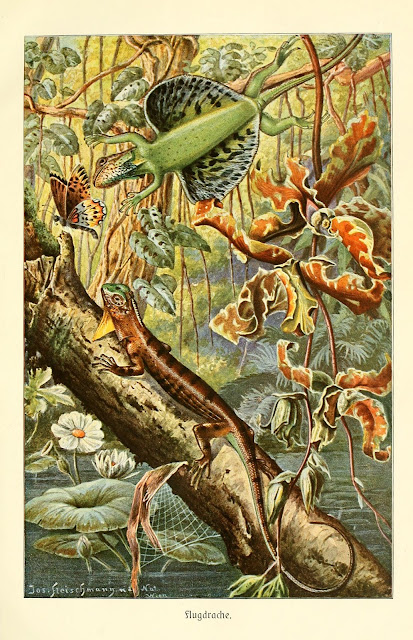