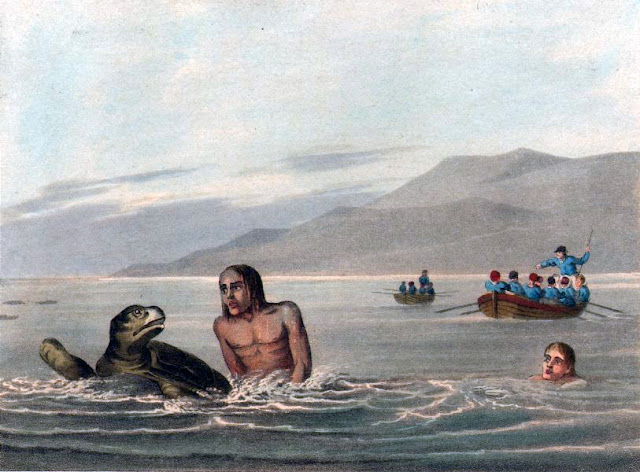 The Testudo mydas, or Common Green Turtle, is found in great numbers on the coasts of all the islands and, continents of the torrid zone. They make long voyages from their feeding places, to a spot, commodious, for depositing their eggs. Those which lay their eggs on the Caymanas islands, off the southern coast of Cuba, come above a hundred leagues· from their usual haunts; and those which deposit their eggs on the shore  of the Island of Ascension, must  come from a much greater distance, since the nearest land is more than three hundred leagues off. In some parts of the South Seas, a curious method is employed to catch turtle the party proceed in boats cautiously towards the Turtles, which are observed floating on the surface of the water during the great heats in. the day-time. As the least noise would disturb them, at a convenient distance the most expert diver lowers himself into the water, and swims beneath the surface towards the Turtle he intends to seize; then, rising just behind it, he takes hold of the buckler near the tail, and forcing the hinder part of the animal beneath the water, he raises the head, and prevents it from diving; in this situation he continues to hold it, until his companions arrive with the boats, and secure it.

The Turtle has been caught, measuring six feet long and four broad, and weighing between eight and nine hundred pounds; but the general size is from four to five feet long, and five hundred pounds in weight. The great demand for this animal in England, where it is considered as the highest gratification of epicurism, as well as the enormous consumption of it in the British West Indies, will, at no remote period, tend to a destruction of the Turtle, that will approach. nearly to its. annihilation. The markets of the West Indies are continually supplied with Turtle, as those of Europe are with mutton and beef.