This Day in Herpetology - 2 November 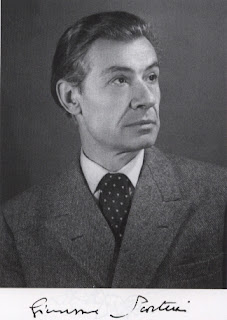 Giuseppe Scortecci, authority on African and desert herpetofaunas, was born in Florence, on 2 November 1898. After service in World War I, he obtained a doctorate in natural sciences at the University of Florence (1921) and joined the staff of the Institute of Comparative Anatomy there. He later moved to Milan as Curator of Lower Vertebrates at the Museum of Natural History and, finally, in 1942, to the University of Genoa, where he became Professor of Zoology and, later, dean. Scortecci's special interest was deserts and, thus, also lizards. He conducted numerous explorations in the Sahara, north to Libya and east as far as Somalia and Arabia, often into previously unexplored regions. His interests coincided both geographically and chronologically with the expanding Italian colonial empire. Besides his taxonomic work, Scortecci also published on zoogeography, ecology, anatomy, and physiology, and he was widely honored for his work. He died in Milan, on 18 October 1973, from injuries suffered in a street accident.

Beginning in 1928, Scortecci published about 50 herpetological titles. His major contributions, besides sizeable papers on collections from various regions in northern Africa, include small books on the amphibians (1933) and poisonous snakes of Italian Somalia (1934), another on the amphibians of the Tripolitania region in Libya (1936), a major work on the venomous snakes of Italian Africa (1939), and the herpetological section of the Sagan-Omo mission to Ethiopia (1943). He also authored the enormous herpetological volume (1967), with its lavish photographs, in the nine-volume, 5,000-page Italian series "Animals," which was entirely written by him.

Scortecci published a book on the Sahara ("Biologia Sahariana," 1941 [1940]) which, because it was issued during World War II, was not widely distributed and is little known; it emphasized reptiles and was illustrated with many photographs by the author. Another more general book on the Sahara was published by him in 1945. Scortecci also published four major papers (1937–1941) on the sensory organs of the skin of agamid and iguanid lizards, following up on research by the German anatomist Franz Leydig in 1868, and Scortecci was the first to distinguish the two principal types of skin receptors.

Adler, Kraig (eds.) 1989. Contributions to the History of Herpetology. Society for the Study of Amphibians and Reptiles, Oxford, Ohio, 202 p.

This book is still available from SSAR (click here)

Email ThisBlogThis!Share to TwitterShare to FacebookShare to Pinterest
Labels: This Day in Herpetology