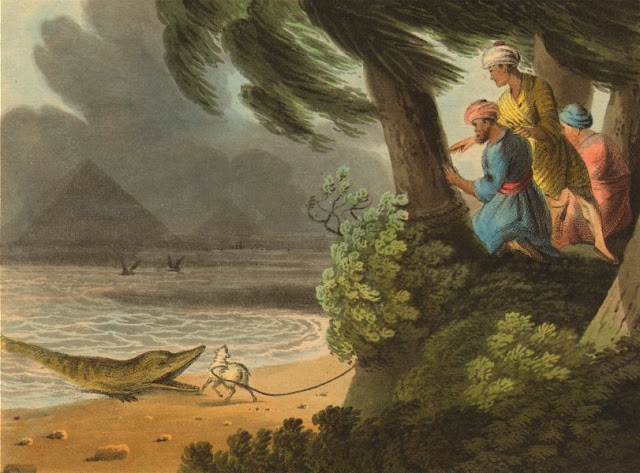 This is the first of seven posts that highlight the storytelling, reptile art work of Edward Orme (1775- ca 1848). Orme was an engraver and painter who produced 700 etchings and book plates. He was an engraver to both King George III and the Prince of Wales. Orme opened a shop as a printmaker on Conduit Street in Mayfair in 1800. A year later, in 1801, he opened another shop on the corner of New Bond Street and Brook Street. He published many books of aquatints (a print resembling a watercolor, produced from a copper plate etched with nitric acid) and etchings. His art was included the 1819 book Foreign Field Sports, Fisheries, Sporting Anecdotes from Drawings by Messrs. Howitt, Atkinson, Clark, Manskirch, & C. With a supplement of New South Wales which contained 110 plates. The plates were based on sketches and the stories were provided by travelers. Seven of the plates contain reptiles.  He closed his print shop in 1824. He also spent part of his career as a real estate developer. For more on Edward Orme see the British Museum account

The Orme post shown here is illustrating how Egyptians catch crocodiles. The story that goes with it is shown below.

The Crocodile of the Nile is of a greenish yellow, variegated with pale green blotches and transverse lines; having, at a distance, the resemblance to brass slightly rusted. The under parts of the body, tail, feet, and inner sides of the legs are of a yellowish white. The Egyptian peasants often catch this tremendous animal by means of a strong rope, tied to the trunk of a large tree , having a hook at the other end, to which a living lamb is attached: this is left on the banks of the Nile till the Crocodile, attracted to the spot by the cries of the lamb, gorges it , and the hook becomes fixed. The more the Crocodile struggles to get free, the more firmly the hook penetrates. The peasants then give line, as the Crocodile retreats, watching all its motions in the water; and, when it is completely exhausted, they drag it on shore. It is singular, that the absurd assertion of Aristotle, respecting the under jaw of the Crocodile being immoveable, should have been believed for so long a succession of ages. The motion of the jaw of this animal is the same as that of all others. In some of the interior parts of Africa dogs are employed to hunt the Crocodile; but they are provided with strong iron collars, full of spikes, that they may be the better able to overcome so formidable an antagonist.