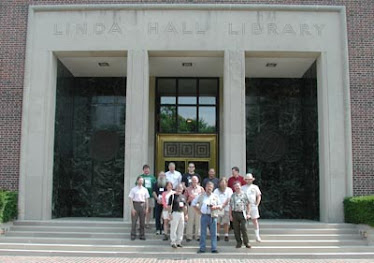 Following the Annual Business Meeting in Kansas City, Missouri, USA the delegates and guests had been invited for a pre-arranged study tour to the impressive privately funded Linda Hall Library of Science, Engineering, and Technology. Mr. Bruce Bradley, Librarian for History of Science and Special Operations, welcomed the group at the grandiose entrance to the library building, which is located in the middle of its 15-acre park-like property. The Linda Hall library is one of the world's leading collections of science, engineering, and technology. It holds more than one million volumes, from the fifteenth century to the present. Emphasis has been made on historical collections through fifty years of careful acquisitions.

Mr. Bradley (far left) and staff had, in preparation for our visit, made a special literature search to identify their collection of notable literature of all ages with herpetological significance. The staff had put on open display not only books that focus on herpetology alone but also numerous natural history books in which herpetology forms important parts. The relevant sections had been marked with slips of paper for easy browsing. Books for which the title does not indicate the herpetological contents are otherwise so easily overlooked. Mr. Bradley in his talk introduced the audience of the library and its history as well as some of the books he had laid out. The Linda Hall Library had also prepared a leaflet of the books on display including about 30 titles, most from the 17th and 18th century but also a few from the 19th century. 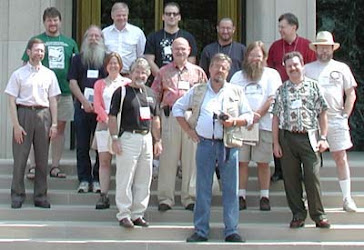 Of the very early books with substantial sections on herpetology were several editions of Konrad Gesner's mid-sixteenth century work, Historia animalium, including a scarce German abridgement with hand-colored woodcuts that is titled Thierbuch (1563.) Other encyclopedias of similar kind that followed Gesner are also represented in the collection, for example: Ulisse Aldrovandi (1640) Serpentum, et draconum historiae libri duo, Joannes Jonstonus (1652) Libri III. De serpentibus et draconib. The original massive folio by Albert Seba (1734-1765) Locupletissimi rerum naturalium thesauri accurata descrptio, et iconibus artificiosissimis expressio had been described in the latest Newsletter & Bulletin, Vol. 3(2), by Aaron Bauer and it attracted naturally extraordinary interest. The books were too many for all to be mentioned here. The conversation that followed in the bus returning to the congress center was all about how rewarding the tour had been. We all thank the Linda Hall Library staff and especially Mr. Bradley for their great gesture in exhibiting the library for us.